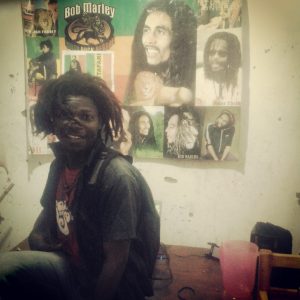 “Music means life to me. Its what I will do forever. I don’t think I could ever stop, cause its life to me. I feel it.”
After four days I finally manage to get an interview with ‘King I’, a kind and always smiling artist who stay’s at the Music Crossroads centre. Every time we were about to start the interview, someone would interrupt with a job for him to do. The president of Music Crossroads generously offered him a place to stay at the centre when he heard him record one of his songs in the studio one day. During the week King I works at the centre, hands out instruments to the students, cleans the music rooms or gets airtime for the people at the office. In the weekend he got music classes of his own and he can make use of the recording studio.
“I live as a Rasta”, he says with a big smile on his face, “but you don’t hear it so much through my music. My music is Reggae with a fusion of Malawian traditional music. My Rastafarian culture come’s mostly out in who I am, how I live and how I stay. I don’t eat meat, I don’t drink alcohol and I don’t smoke cigarets. It’s who I am.”
When King I became a Rastafarian people thought it was madness. “They would try to put me down and tell me I would die if I wouldn’t eat meat,” he says.“But it’s my life and my choice. I just live and don’t compare myself with others and I have peace. If they don’t get what I’m saying I just move from them, take my guitar and play music.”
King I explains me how it is actually not strange to have dreads, but very natural. “Just think,” he says, “if someone is born and he will never shave his head, he will have dreads. So everyone has dreads but they cut it. And when they comb their hair they damage the dread. If you don’t comb your hair, you’ll have dreads, it’s natural!”
He let’s me hear one of his songs in which I can clearly hear from his lyrics how much he loves his own country. “Off course we are struggling with poverty”, King I says, “but we live in peace. There is no war. You see, there are other country’s where they are always fighting. And they got so much money and things. Here we are poor but we living peacefully and free. That is why I love Malawi.”
When I ask him if he has any advice for all the country’s in the world who are at war right now he gives me the most simple, but most perfect answer. “They should just stop fighting!”, he says. “We must live as one people. No matter how we appear, or what jobs we have, we are all equal.” He points at my hands and says “You got hands, I got hands. You have nose, I got nose. You have eyes, I have eyes. We are the same! Human is human. That is how I feel.”