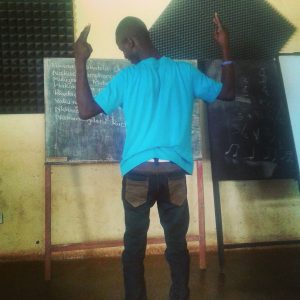 “I will not just be famous. I will be even more famous then all these celebrities. You remember when the South African president died and it was on the news all over the world? That’s how it will be when I’ll die. I promise you that.”
I’m listening to the story of David. A nineteen year old boy who is in the post-release program of Young in Prison. When he was very young, his father died. His mother had to work and he was left to be raised by his grandmother. A couple of years ago, he stole money from his mother, who reported him and sends him off to jail for three years. “She blamed me, I blamed her, but in the end, I know it was my fault. She puts me in prison and then she died while I was in there. It was very hard for me when I lost my mother when I was in jail. I couldn’t even go to her funeral.”
Life in prison was clearly not easy for David. As I’ve seen now with my own eyes, the Malawian prison looks like hell compared to our Dutch prisons. “I thought I would die in there. We would get food only once a day; Nsima (sort of like mashed potatoes but then from corn flower) and beans. Every day the same thing. We would sleep on the hard floors with nothing to cover us.” He’s showing me with his footsteps how big the cells were. Something like 5×4 square meters. “We would sleep in one cell with more then 30 boys.” Although David had a hard time, he’s now seeing things from the bright side. “Apparently it was God’s plan for me to go to prison and become a changed man.”
When he met with Young in Prison he started to develop his acting skills and even got his certificate. After he got released he felt like a different person. “I felt like I was born again. Although I sometimes do look back and blame myself for spending such a long time in prison.”
David went back to school and is now determined to become a famous actor. When I ask him where he would see himself in ten years from now he replies: “Ten years? That’s way too long. Let’s say five or seven years. I’ll be very famous. The whole world will know me. I will change the lives of people in prison, in hospitals, and many more. I believe in myself. One day I’m gonna make it and believe me, I’m gonna make it!”