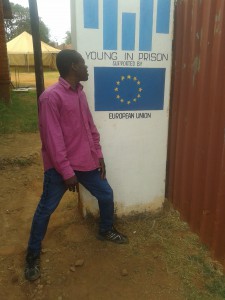 This is Victor, a 24 year old singer and one of the guys from the postrelease group – a group with guys who just got released from prison. In a session of two hours they all had to make a brainstorm field about their life. After this, I asked them to summarize the most important things and make an introduction, a middle part and an outro. Victor got up second and started telling his story.
“When I was three years old, my father died. He was the only one making money, and after he died, my aunts and uncles took all the money, leaving me, my mother and my three siblings empty handed. After I finished secondary school I wanted to go to a music college, but couldn’t afford to pay for it. When I turned eighteen, my mother also died. I decided to get a job for myself to save up for my music college. At a certain point I got involved with the wrong kind of friends and thought ‘there must be a faster way to get this money!’One thing lead to another and not long after I found myself in jail.”
Victor was telling his story at a tone as if it was any ordinary tale, something I found strange at the moment, but thinking back at it, I sadly think it actually is kind of an ordinary story for the people around here. Looking back at his notes though, I found a touching piece he wrote that I didn’t hear back in his first speech. “After I got arrested I saw life as very bad and I even wished to die. Nobody came to see me when I was in jail. There was very little food, little luck of good water and no freedom to walk out alone or express my own views…”
While in prison Victor got in contact with Young In Prison, who gave him singing and guitar lessons. When he got out, he started to become a roll model for other youths in prison as a lifeskill facilitator and started to focus again on his music. He just recorded a song with a famous Malawian singer, which is playing on the radio right now!
“I hope my story can let other people know that everything’s possible, no matter what obstacles are on your road. Keep moving forwards and don’t look back.”