A survivor, not a beggar 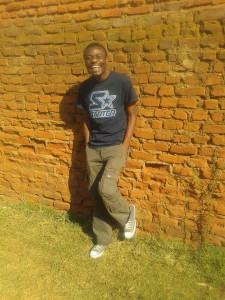 This is Menes la Plume. A young slam poetry artist I met at the Music Crossroads centre. Menes was forced to run from his homeland Congo, because he was making “political incorrect” music. ”You could go to jail for that?” I ask him. ”You could die for that”, he replies. He arrived in a refugee camp in Malawi where he’s staying now still, together with 15.000 other refugees.
“In my poems I talk to raise awareness about Africa. For instance, nowadays, we all need tablets, smartphones and laptops. Those things come from Africa (Uhhh….I thought everything just comes from China, but after a lil research I find out what he’s talking about is Tantalum, a mineral that is needed for all computer devices and that is mostly found in the East of DRC, Democratic Republic of the Congo. Damn I didn’t even know this and I felt a lil weird later when I was typing this story on my laptop, using the recordings I made of the interview with my smartphone…) Big company’s in Europe and America give money to the war so that people can kill each other and they can have those resources. Not only Tantalum, also Colton. They can have it easily without spending a lot of money and then make a big profit. More then 9 million people past away from the war and it’s not written anywhere.
In all the magazines, we see Rihanna, Shakira, and those people, but you never hear them talk about millions of women getting raped and killed. Everyone’s happy to use their laptops and smartphones, but they don’t know that people are killed for them to have those. Every time I write I’m trying to raise awareness to let people know that in other parts of the world, there are things happening they don’t know about.”
“I hope that the day someone sees a refugee they will see a survivor, not a beggar.”